A menace of Mynas

Meanwhile back in Australia Andrew has been taking some picture of Indian Mynas for me to work with. I love his observation notes of this specific twitch: 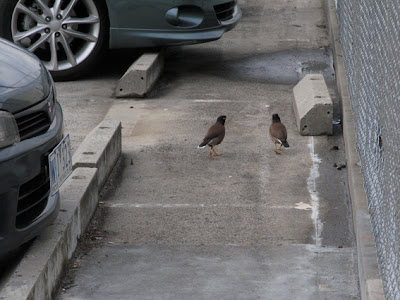 Stalked mynahs in the South Melbourne Market’s carpark for an hour, baiting them with bits of sausage roll. I have sausage roll grease coating the inside of my mouth and my hands. No luck at Macca’s or at the Preston Market. Weird. Walked around the streets of Preston south and thought a lot about ideal mynah habitats. Noticed that they like to perch places and bounce their calls off hard surfaces like tile or brick. They like open areas in the sun, with a good lookout above. They don’t go as high as crows, or as exposed. Starlings like undergrowth and shade. Sparrows .... just plucky. Hard to get close to Preston mynahs more than 4 m or so—they keep hopping away and looking over their shoulders.

At South Melbourne Markets they have an undercover loading dock for all the produce. Noticed straight away that the mynahs, sparrows and pidgeons were all ducking in under the roof and having a great old time. Not so good for photos though. A stroke of brilliance was putting their carpark on the roof. Mynahs feel really secure there and there’s lots of stuff dropped out of cars for them. They can get away from trouble by going under parked cars, or make a break for the fence that separates the market’s roof top from the carpark. I got some great shots, could get closer it seems cause they are used to people walking around.

Leftover trashy food had eluded me ... thinking I could go back to the markets, get some take-away chinese, or salad, or more sausage rolls and leave them in strategic places. The little buggers are really canny though—they know you are watching them, and always keep a safe distance between you and them. Didn’t like the bits of sausage roll I tried to bait them with. Checked it out, didn’t even touch it.  They see or sense intention, I think. 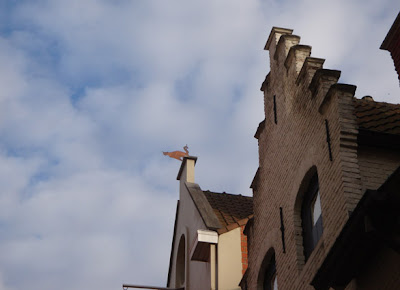 Posted by birdmonkey at 4:08 AM No comments:

Conversations between squirrel and spider

in the Jimmie Durham exhibition at the M HKA in Rotterdam

On one of the animal sculptures from the 1990s "Squirrel", a small spider had made his home between the squirrels ears. He was so small i could not get the spider in focus. 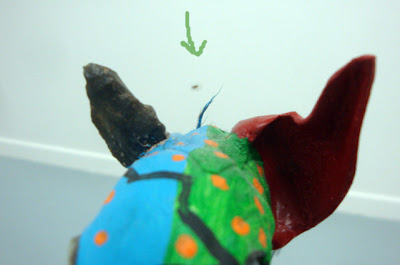 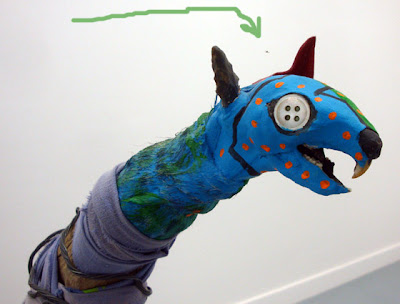 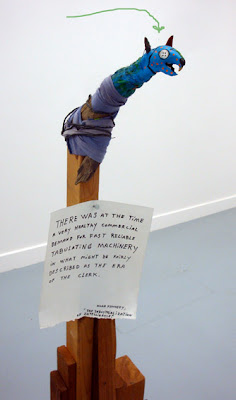 This was a fantastic show, especially to see after the Minding Animals conference. Waving to all new animal friends.
Posted by birdmonkey at 3:26 AM No comments:


Jackdaws (Corvus monedula) heading back their communal roosting spot for the evening. I saw this each night I was in Ermelo at around 8:30pm.
Posted by birdmonkey at 12:14 AM No comments:

Although it is not really his herb garden as Linnaeus was only in Harderwijk for only a week or so, to get his instant doctorate. What's more, the original plants where sold off after Napolean took control of the city and shut down the University. The two remaining specimens from that time are a ginkgo and plane tree. The plane tree has been heavily pollarded and looks not much more than an enormous stump. 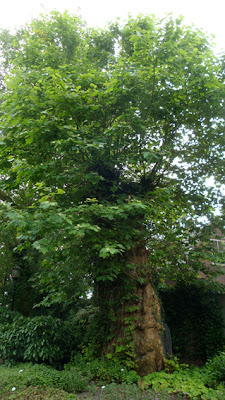 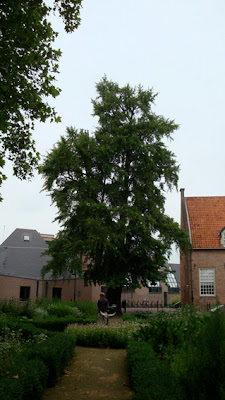 In an adjoining open space that also surrounds the De Horus, the old Botanical department building, there was anther huge plane tree whose stump was as large as the one in the renovated herb garden. 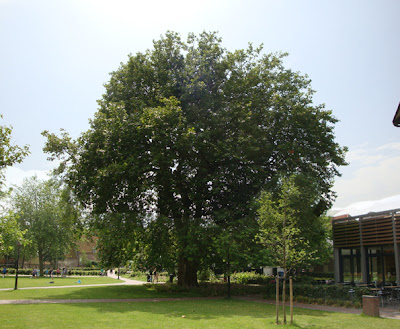 Posted by birdmonkey at 2:13 AM No comments:

In the garden of Linnaeus

Bubble bees moving among the flowers in the herb garden of the former University of Harderwijk, filmed for new friends who I met recently at Imaging Nature II: Andre (NZ), Susan and Tarsh (WA). It was really nice to meet some artists and philosophers where interested in questioning science from within the discipline. I would characterise this thinking as an interest in acquiring and disseminating knowledges, that include scientific observation and categorisation, through the poetics of visual arts. (just to reduce an complicated argument to two sentences...) 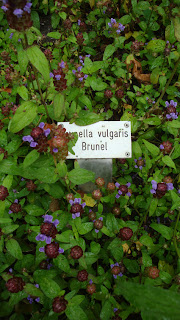 Posted by birdmonkey at 12:42 PM No comments:

Ok I have managed to keep this secret but I am actually quiet nervous about having physical contact with birds and am easily intimidated. As proof I offer you this ridiculous moment when I get chased by a Eurasian Coot (Fulica atra) in a Westerpark. I was too close to the pair and their chicks and the parent had given me some feather ruffling and wing beating warning so I was approaching with care as I could only run forward to get out.

The pond was one of series in old gas tanks. I saw lots of coots with offspring but this was the only case where the parents gave me the warnings and charged me.

Haico’s friend has an apartment two blocks from Westerpark so I went there quiet a few times, and even managed a jet-lagged evening jog. The top end of the park is your classic turn of the century park. However the much larger part is in the now disused gas works that includes several jogging paths and a large quiet wild area that is fenced in for dogs to be let off their leads.

Like many city parks there was several people feeding the ducks in the classical park, But I  didn't see any feeders in the wilder section.


One of my enduring memories from the last time I was in the Netherlands was of sitting with Haico at his parents place watching the swifts (gierzwaluw: Apus apus, although Haico calls them swallows) circling and catching insects in the late evening. I filmed this between 9:30 and 10pm. The sky is not completely dark till after 11pm, and its bright daylight at 5am. It has been very strange having jet lag in with all this daylight.

The bird that greeted me to the Netherlands was a dark headed duck and some small Grebes- I am going to find a field guide and hopefully it will solve the mystery, if I got a good sighting. The first bird I recognised was a Blackbird: the bird that greeted me in Launceston.
Posted by birdmonkey at 3:35 AM No comments: 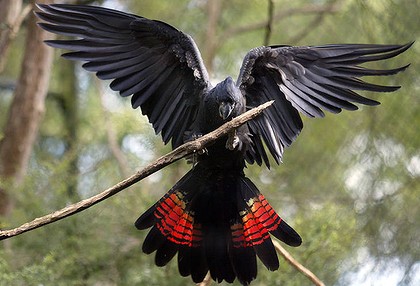 A collision of rare and recovering birds.
From the Sydney Morning Herald last week:


Taronga Zoo is calling on the public to help find three rare red-tailed black cockatoos after they were spooked by four sea eagles during a bird show at 3pm on Monday and flew away, spokesman Mark Williams said.

"The sea eagles are top-order predators and they live on the harbour. The five black cockatoos in the show, seeing them, flew off. It's a natural reaction. They leave the area where they perceive there to be a risk or threat," Mr Williams said this morning.

Two cockatoos were found yesterday but three remained missing, he said, adding that there had been sightings in the north shore suburbs of Balgowlah and Castlecrag.


"They can't put trackers on cockatoos because they chew off the little bands," Mr Williams said.
"It's highly likely that we will see these birds back as they regard the zoo as their home so they will be looking to stay in the vicinity, we hope.

"Once they can be sighted, the keepers will go to them and the birds will recognise the keepers ... and they will come down and have food and we'll be able to take them back."

The cockatoos take part in a free-flight show held twice daily at the zoo. They are usually found along Australia's eastern coast but are not common in the Sydney area, he said.

Once you read about what the red-tails feed on, the complications of how we produce food for human consumption always has a huge effect on the animals that live those landscapes. In this case circular irrigation systems mean that remnant Buloke trees are cleared from paddocks. Buloke is a major stable annual food source that only grows in fertile soils which are favoured for agriculture. In that case unfortunately I don't feel so hopeful for the birds.

But perhaps I shouldn't be so negative after all as the flock was spooked by White-bellied Sea-Eagles, a bird that has only recently returned to Sydney Harbor and has successfully breed several years in a row now. I have never seen 4 W-b Sea-Eagles together, 2 is my record. I wonder if it was the resident pair and some of their juvenile offspring.


UPDATE: I was sitting in the new balcony cafe at the MCA this morning (18/6/12) and saw an adult White-bellied Sea-Eagle being chased over the Sydney Harbour Bridge by two currawongs or raven- I didn't have by bins..
Posted by birdmonkey at 6:31 AM 2 comments:

Surely the strangest cat art ever: Bart Jansen turning his deceased cat, Orville Wright, into a helicopter. He does look like he really misses him. 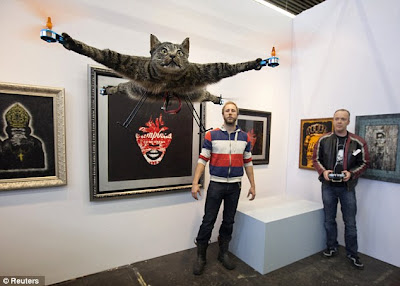 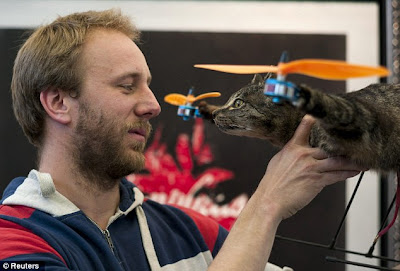 Posted by birdmonkey at 6:07 AM No comments:

Done!
and dusted and now a Dr.

Popular Posts of the last 7 days

Tokyo Bird Song included several posts that where part of the Iteration:again art project curated by David Cross, and hosted by CAST in Tasmania in September/October 2011.
My project used my everyday activity of birdwatching and nature observation to draw people via this blog and some installations into the discursive space of the work. The posts made for, during, or about that time have a I live with birds tag.
A catalogue has been published.

letterpress and other printers

Artists I have meet in Japan

Artists and composers who where on residency at Tokyo Wondersite at the same time as myself.